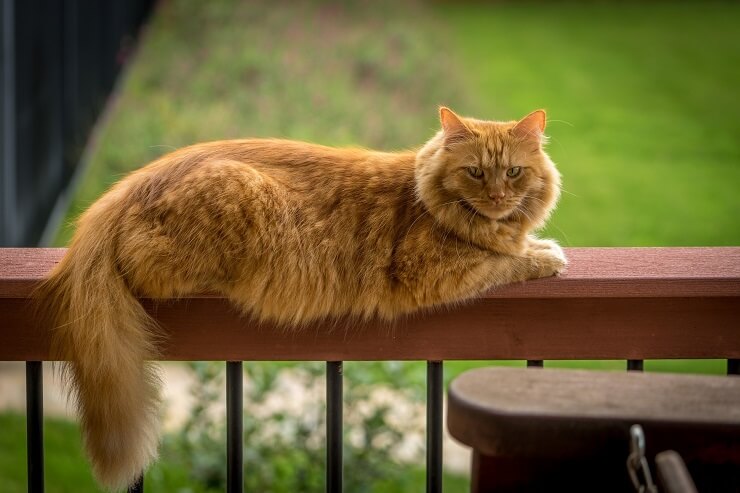 Garfield is a famous American comic strip created by Jim Davis. Since its creation in 1978, several series, movies, comic books, musicals, and video games have been developed based on the Garfield cat character. It portrays the life of characters Garfield the cat, his owner Jon Arbuckle and Odie, the dog.

Garfield is a composite of all the cats Jim Davis grew up with during his childhood. He was familiar with the personalities of 20-25 different cats, which his family had. Jim Davis named Garfield after his grandfather James Garfield Davis who was also named after the 20th United States President James Abram Garfield.

Garfield is portrayed as a lazy, overweight, and mischievous cat who adores his master. He is an orange tabby cat with vertical black stripes, a letter M on his forehead, and a round face. Garfield was born near an Italian restaurant where he derived his huge appetite for lasagna. Though this cat loves his owner Jon and the dog Odie he lives with, he teases them relentlessly.

The iconic character is a common household name, and if you’re wondering what the perfect Garfield cat breed is, here are eight cat breeds you can relate to the comic character, Garfield. 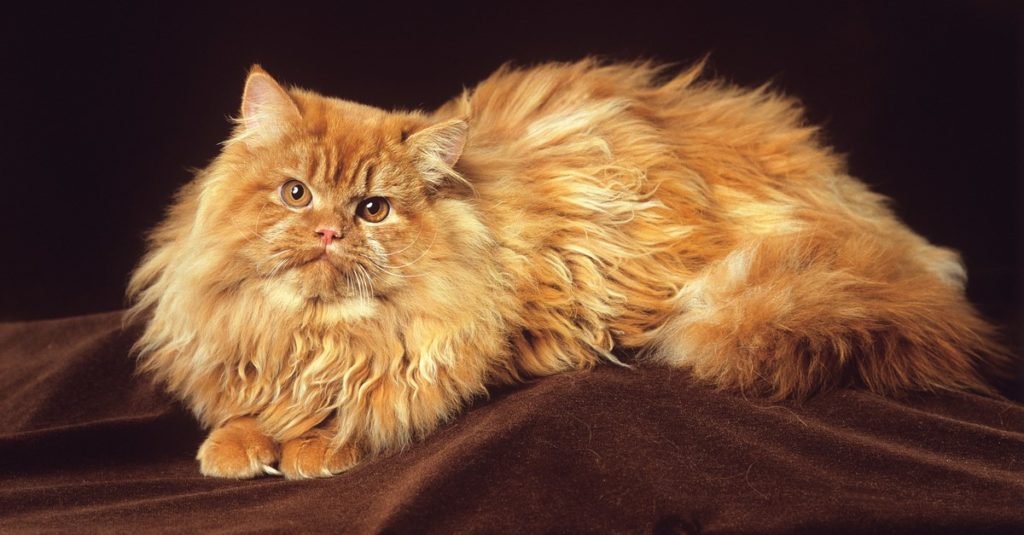 Persians are believed to have originated in Iran as early as the 1920s. This gorgeous cat has a fluffy tail, a squishy face, a short nose, and a medium-sized body.

In addition, your Persian will have a letter ‘M’ pattern on her forehead. Garfield’s black marks on the face, back, and tail resembles those of a tabby cat, while his round and hooded face gives him a Persian appearance.

A Persian feline has a sweet and friendly personality, just like the Garfield character. Persians are also laidback kitties that love lazing around waiting for human affection. They are also docile and enjoy a calm and quiet homestead.

Their thick, fluffy coats need daily brushing to prevent tangling and matting. Persians have a lifespan of 10-17 years. This is one of the most expensive cat breeds, with its cost ranging between $1,800 and $5,500

Maine Coon is a native to the states of Maine in the United States. It’s the largest domesticated cat breed weighing 6-11kgs and measuring 10-16 inches high and 38 inches long. A Maine Coon cat named Stewie has been featured in the Guinness World Record as the longest cat with 48.5 inches.

Maine Coons have a luxurious thick coat and a fluffy tail. They are among the sweetest cats who also love to cuddle.

This breed is very loyal, just like the Garfield character. They are also very intelligent and interact well with children and dogs. They have dog-like personalities and can easily be trained to follow simple commands like sit, stand up, lie down, and high five. You’ll not have a hard time giving a Maine Coon a bath since this breed loves water and enjoys swimming.

If you’re thinking of getting a Maine Coon as a pet, the cost range for this feline is between $400 and $3000. 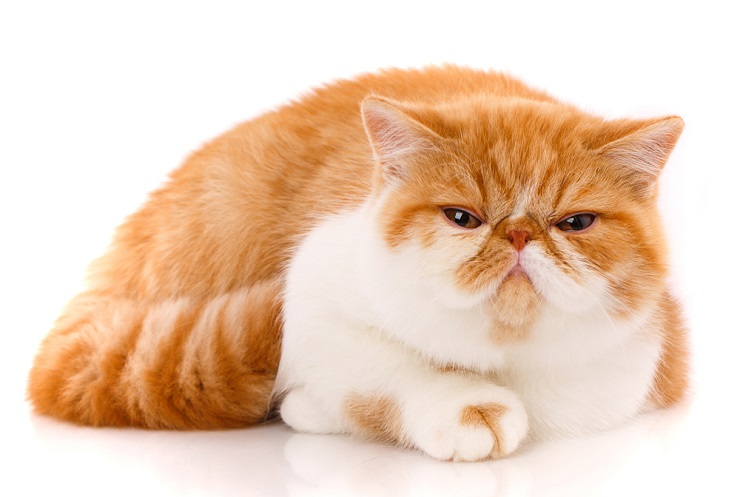 The Exotic Short Hair is a shorthaired version of the Persian. Exotic short Hairs have sturdy, muscular bodies with broad chests and shoulders. This cat’s short fur is woolly and soft.

Like the Garfield cat, your Exotic Short Hair is intelligent, affectionate, and gentle. This breed is very playful and enjoys the presence of children. They are also loyal and will most likely follow you everywhere in the house. This breed can live up to 15 years when well taken care of. You’ll spend $1,200-2,500 if you want to buy the Exotic Short Hair.

The British Shorthair has a round face, a short, broad nose, and a fluffy thick coat. This feline comes in medium to large size with orange, black, blue, and white coloring. Your British Shorthair will have round counters on her face, ears, head, and cheeks.

Even though these cats enjoy sleeping for hours, they are also very affectionate, making great companions for humans and dogs. They are also quiet and don’t demand lots of attention. You’ll spend $1,200-2,500 to acquire a British Shorthair. 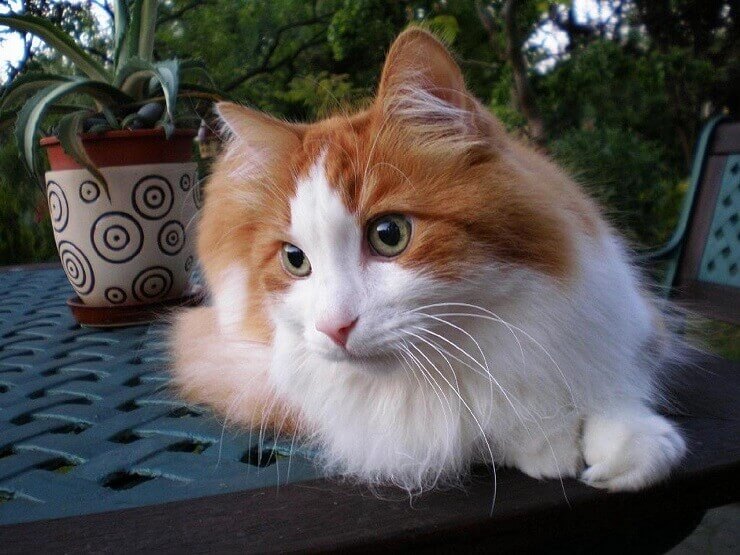 The Turkish Angora originated from Central turkey and has been in existence since the 15th century. European royalties were given Turkish Angoras as gifts by Turkish sultans.

These felines come in several colors, including orange-ginger, shimmering white, black, and cream. They have beautiful blue, green or yellow eyes and a posh tail. This cat is loyal, playful, and affectionate. Since they shed a lot, regular grooming is necessary. 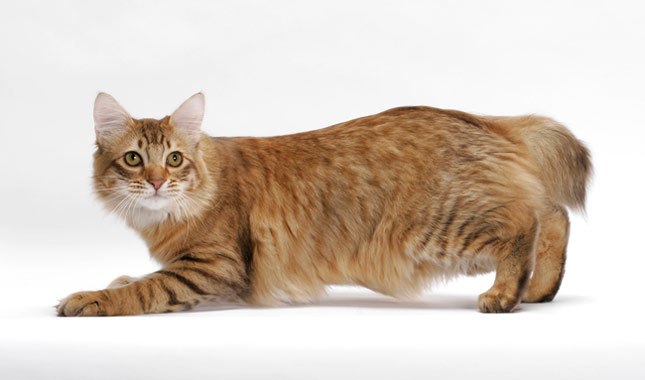 The gorgeous American Bobtail has a short tail, a long silky coat, almond-shaped eyes, and a medium head. This cat comes in various shades, including ginger, white, black, blue, and fawn. This cat breed is energetic, friendly and forms a strong bond with its owner.

Not only will your feline get along with other family members but with strangers and your dog too.  Your American Bobtail has puppy-like features and will enjoy playing games like fetch and hide and seek. 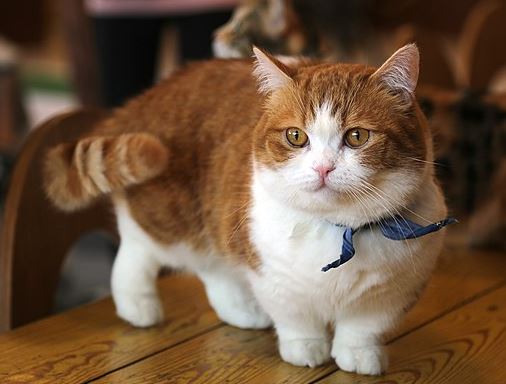 These adorable tiny cats have short legs, long spines, and medium-sized bodies. Your Munchkin feline body is thick with a well-rounded chest, just like the fat Garfield character.

These cats come in long and short hair versions. The hair is plush with a silky appearance.

Munchkins are very social, forming strong bonds with humans. They are also very active and enjoy playing fetch. Despite their short legs, they can run fast. They are also known to be mischievous, especially when it comes to hiding toys and shiny objects.

Bengals is a beautiful and unique cross of the Asian leopard cat and a domesticated cat. This majestic feline has a large muscular body with a thick tail that is black at the tip.

The Bengal’s broad head has small ears with almond-shaped eyes. Their leopard-like spotted coat is luxurious and has a tint of orange. They are very energetic, curious, and talkative. You’ll need $400 to$10 000 to buy a Bengal feline.

What breed is the Garfield cat?

It’s believed that Garfield is a composite of many cats Jon met in his childhood. However, the orange tabby Persian cat matches most of the Garfield traits, including his appearance and laidback personality.

How much does a Garfield cat cost?

Is Garfield a Maine Coon cat?

The Maine Coon cat has a loyal personality and gets along with dogs, just like the Garfield character.