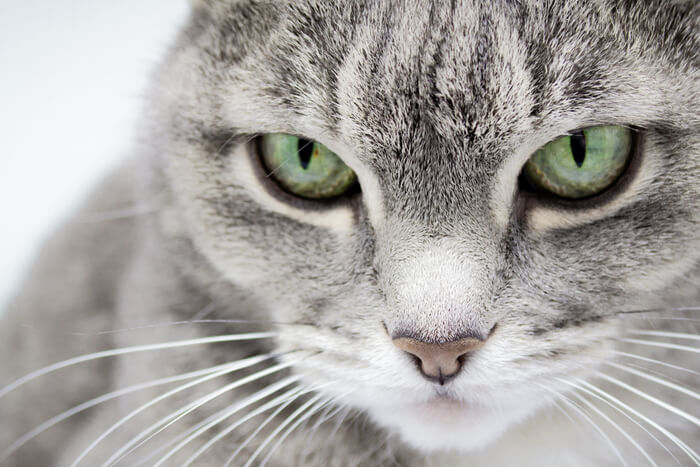 A cat’s eyes are the windows to their souls even if they come in blue, brown, yellow or green, or a range of shades in between. The eye color is caused by the presence and activity of melanin in the cat’s body, which is the result of genetics.

Read on to learn more fascinating facts about the 8 types of eye colors.

How Cats Get Their Eye Color?

There are two major factors that determine a cats eye color: iris pigmentation and blue refraction.

The pigmentation of the iris is caused by melanin and the color ranges from lemon yellow to hazel to deep orange or brown. In addition to this, the “transparent” structures of a cat’s eyes absorb and refract light much like a sheet of glass. Viewed head on the glass appears colorless but viewed edge-on it is greenish or bluish. Just like glass, the transparent structures in cats’ eyes are transparent blue, ranging from practically colorless to deeper blues and violet-hued blues.

A second factor is how much pigment those melanocytes produce. Those that produce less pigment give a lighter shade, while those that are more active and produce a lot of pigment give the deeper shades. Basically, eyes with a low number of melanocytes can range from pale green to strong green. Similarly, the yellows range from light amber to deep copper. The activity levels of melanocytes are genetically determined so it is possible to selectively breed for either deeper or paler eye colors. The way that light passes through the various blue-tinted structures gives us the final visible color.

If your cat does not receive a lot of melanin to its iris, it will end up with blue eyes. Although a correlation between a cat’s fur and eye color has yet to be scientifically proven, cats with blue eyes usually have white or very light fur color.

Kittens are born with blue eyes but that does not mean they will stay blue. In some breeds, the blue color is permanent, but in most it will be replaced by another color starting around 6 weeks old. The blue color depends on the intensity of blue refraction. Blue isn’t the rarest eye color and is fairly more prominent in certain breeds of cats.

For example, the Himalayan cat and the Snowshoe cat breed have blue eyes. Cats with white fur and blue eyes should not be confused with albino cats that have no melanin levels.

The green of a cat’s eyes can vary from a green with yellow undertones to a green mixed in with shades of blue. It is also sometimes possible to see flecks of gold or yellow within the iris of a cat with green eyes.

Shades of green are not as rare as hazel eyes in cats, or blue but one of the more rare colors except in certain breeds.

Green eyes can be found in breeds like the Egyptian Mau, Havana cats, and Norwegian Forest Cats which can have eyes in a range of shades of green. Russian Blue cats may also have vivid green eyes.

Hazel eyes are a blend of green and golden yellow. While this striking hue is usually rare in house cats, it is not at all uncommon in their wild cat cousins.

This is the eye color of most wild cats in temperate regions, including Lynx and Bobcats. It’s also a common eye color in feral cats. But this is one of the rare eye colors for domestic cats to have.

Breeds that can have hazel eyes include the Abyssinian, Bengal, Singapura, Cornish Rex, and the Scottish Fold.

Cats with brown eyes do not actually have brown eyes but more likely they have copper eyes. A darker shade of copper tends to happen when there is a lot of melanin in your cat’s irises.

This color is considered very rare and unusual.

Copper is an eye color that can be seen in many breeds, such as the Persian, the Chartreux and the Cornish Rex.

The color yellow on the cat’s eye will depend on the hue intensity. It can range from a very pale-yellow lemon color to a more vivid color. However, it should be kept in mind that color overlaps are also possible. For example, there can be an overlap between the yellows and browns, as it is with yellows and greens.

This is probably the most common eye color that you can find in cats.

Yellow eye colors can be encountered in breeds such as the British Shorthair, the Norwegian Forest Cat, and the Bombay.

The orange eye color can be seen in specific breeds, and that is because British breeders used this feature for mating in their catteries.

This eye color can be seen in breeds such as the Devon Rex, Maine Coon, Turkish Van and Japanese Bobtail.

The technical term for odd-colored eyes is heterochromia iridium, which refers to the fact that each iris is a different color. This can be inherited, congenital or the cause of an accident or injury.

Odd-colored eyes are most often seen in white cats with the epistatic gene. Usually, one eye will be blue and the other green, hazel, yellow, or orange. This type of color eyes are highly rare.

Dichromatic is used to describe when there are two colors in one eye. This could manifest as a “pie slice” or a colored ring about the pupil.

If both of a cat’s eyes are dichromatic, they may be a mirror image of each other. This is the rarest eye color type.

What About Pink Eyes?

Pink is not a standard eye color in cats. It is found in pink-eyed albinos and is due to a complete lack of pigment in the eye combined with very little blue refraction. True albinos entirely lack melanin and the iris is pale pinkish-white. The eyes usually have a bluish hue, resulting in a blue-eyed albino. Very rarely the transparent structures are colorless and pink-eyed albino results.

It was once believed impossible for a cat to have pink eyes due to the structure of the eye and true albinos had pale blue eyes, but there have now been several pink-eyed albinos reported in recent years. Albinism has been recorded in the Bengal breed and in its wild parent, the Asian Leopard Cat.

While eye color is genetically linked to coat color and to specific breeds, some can be found in some purebred and mixed breed cats. 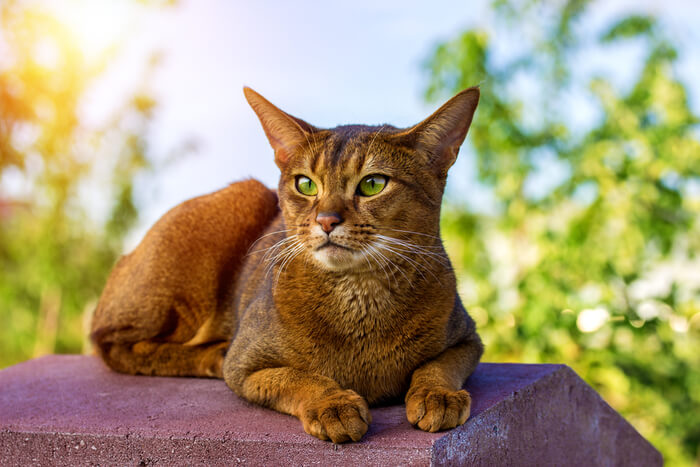 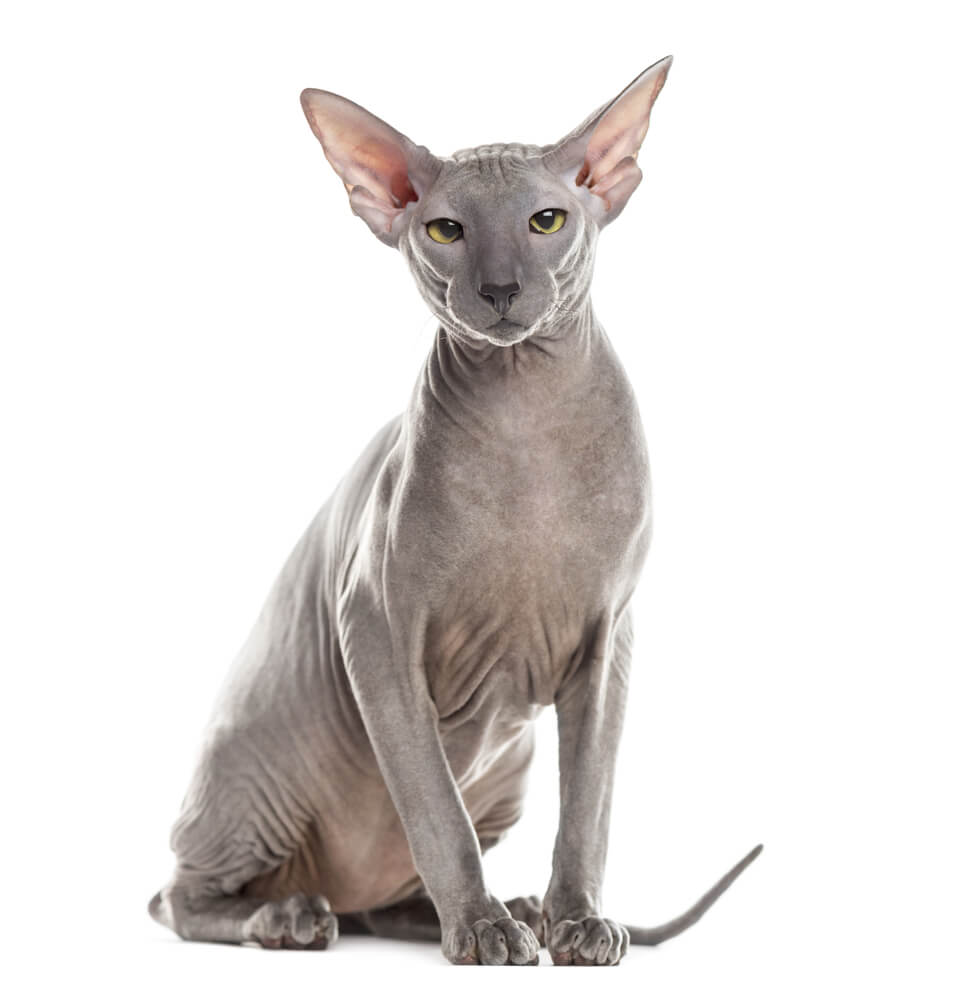 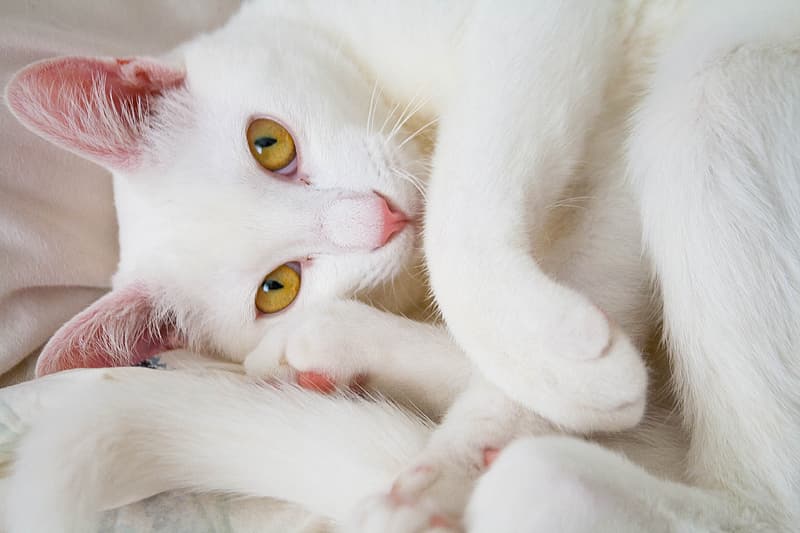