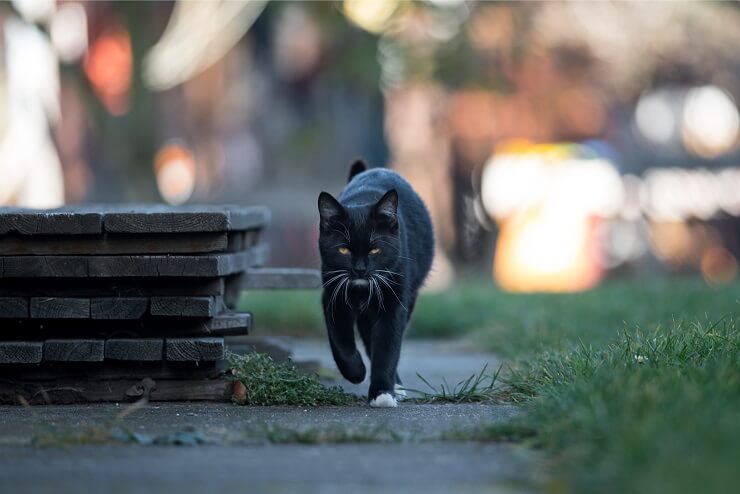 No other cat has been more criticized than the black cat. Black cats appear in the folklore of many cultures around the world, as both good and bad omens.

You may have heard the superstitions about black cats, but there is a lot to love about these beautiful creatures, which is evident by the holidays created in their honor.

1. Only One Breed Of Cat Is Purely Black 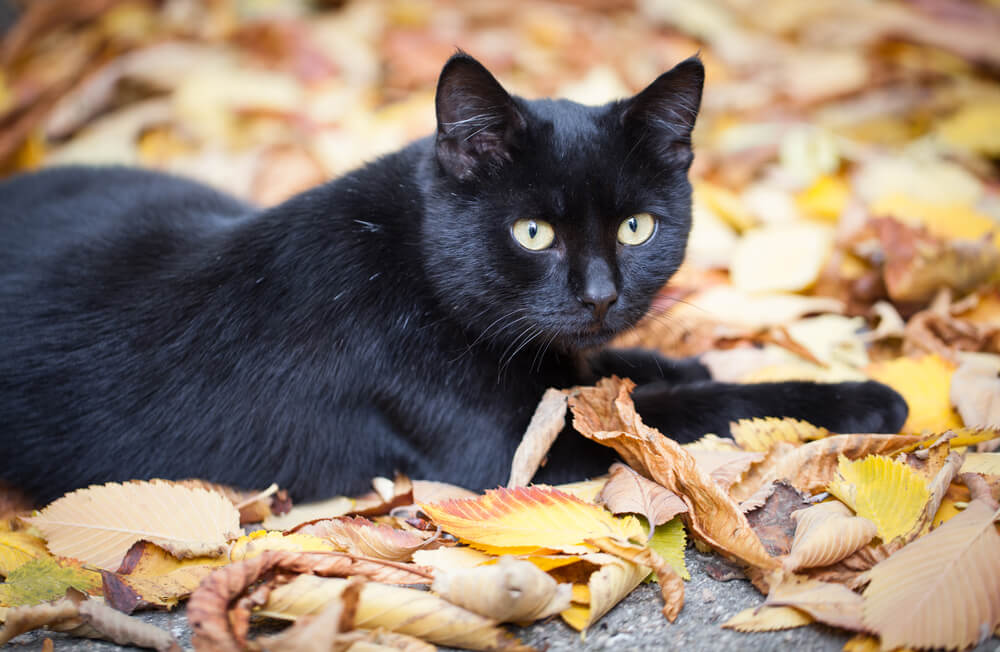 There are as many as 22 recognized breeds that can have solid black coloring but the only purely all-black feline is the Bombay cat. Bombays are all black everywhere, with solid black fur as well as black paw pads, noses, and whiskers.

The breed was developed in the 1950s by crossing Sable Burmese with black American Shorthairs with the intention to create a tiny version of a black leopard, with a sleek all-black shorthaired coat and bright yellow eyes.

The other breeds that can be solid black are American Bobtail, American Curl, American Shorthair, American Wirehair, British Shorthair, Cornish Rex, Devon Rex, Exotic, Japanese Bobtail, LaPerm, Maine Coon, Manx, Norwegian Forest Cat, Oriental, Persian, Ragamuffin, Scottish Fold, Selkirk Rex, Siberian, Sphynx, and Turkish Angora. These other breeds of cat can be all black, but in order for a cat to be solid black, both of the cat’s parents have to have the black hair color gene. 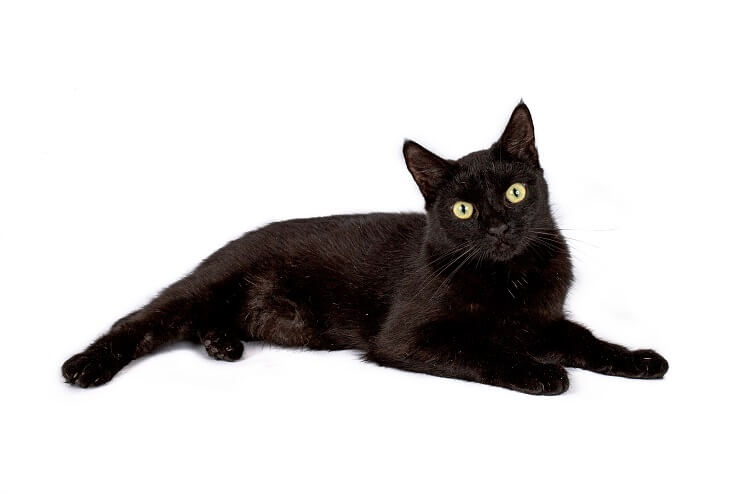 Researchers at the National Institutes of Health discovered that the genetic mutations that cause cats to have black coats may offer them protection from some diseases. In fact, the mutations affect the same genes that offer HIV resistance to humans.

Because cats experience many of the same health issues humans do like Cancer and Alzheimer’s to name a few, experts believe studying these mysterious kitties could possibly help humans fight these illnesses. By learning how black cats have evolved to resist diseases, researchers can possibly learn how to prevent some diseases in mankind. 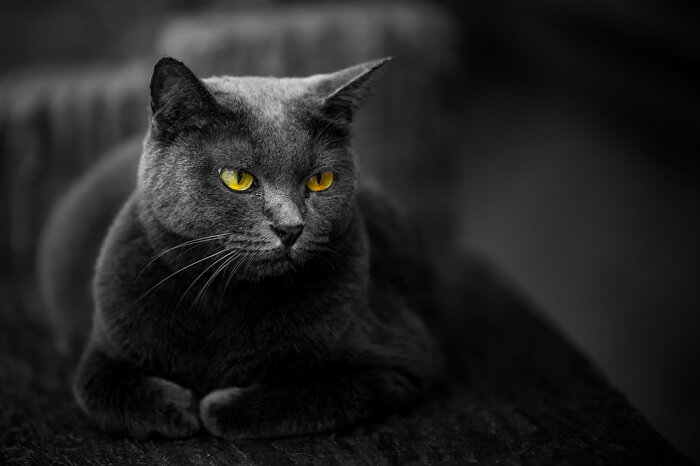 Black cats have been viewed as good luck in many countries around the world. In Japan, if a single woman owns a black cat, it’s believed to increase the number of her romantic interests.

England and Scotland also view black cats as good luck when they cross your path.

In Russia, all cats are considered good luck.

In France, if you see a black cat something magical is about to happen.

In Asia and the U.K. if you own a black cat you will be lucky in life.

In Europe and Ireland sailors believed that if you brought a black cat on the ship you will have a safe journey.  Cats also served a purpose on board ship by keeping the rodents away from the ship’s stores. Some of these maritime cats are remembered in Navy history, specifically Tiddles, who traveled over 30,000 miles aboard Royal Navy vessels.

In many Asian countries, such as China and Japan, black cats are not only considered good luck, but may also attract wealth. That is why you see many black Maneki Nekos, which are believed to ward off evil spirits and bring good fortune, in Chinese or Japanese restaurants and grocery stores.

4. There Are More Black Cats Than Any Other Color 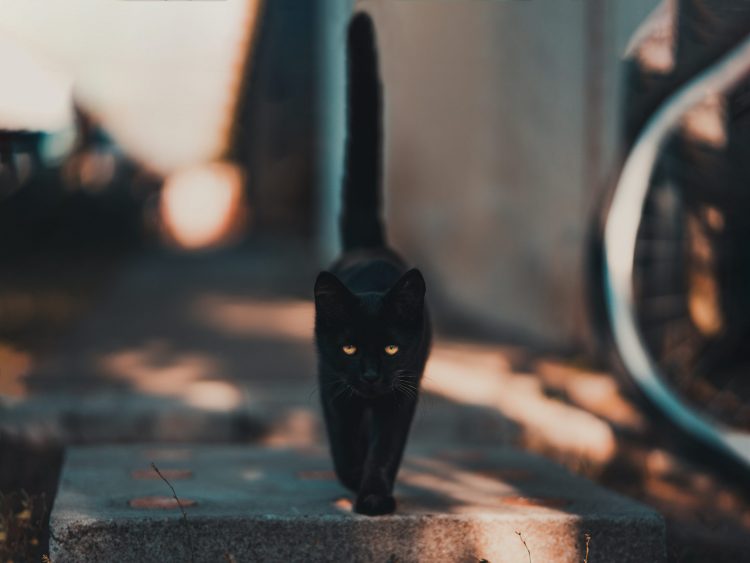 There are more black cats than any other color, according to the ASPCA. That’s because the genes that cause black coloration or melanism in cats, are the most dominant. Melanism is the opposite of albinism and is a high level a melanin in the pigment of these cats. Melanism is most prevalent in male cats.

Both cat parents need to have the black color gene for their offspring to be considered a true black cat. Two black color genes must be present to overpower the dominant fur pattern of a tabby.  The high levels of melanin also produce yellow irises.

5. Black Cats Are Known To Get “Rusty” 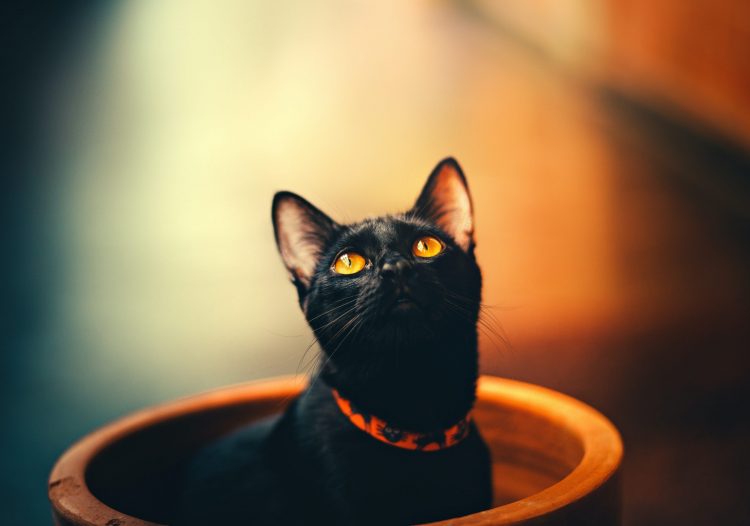 A black cat’s coat may change from solid black to a reddish-brown color. This is called “rusting” and can happen for a few reasons. One of the most common reasons is when a black cat spends a lot of time lounging in the sun. Just like humans whose hair lightens from sunbathing, the sun can have a bleaching effect on a cat’s fur, turning it from jet black to reddish brown.

Another reason a black cat’s fur might “rust” is that he has a nutritional deficiency. Cats require the amino acid tyrosine to produce eumelanin, which is the pigment that creates black fur. If a black cat has a tyrosine deficiency, their fur can change color. This is an easy fix because tyrosine is found in animal proteins such as meat and fish and the deficiency can be reversed by adding more meat to your cat’s diet.

While rusting is most commonly caused by one of the above reasons, it could be a sign of a more dangerous issue such as liver, kidney, or thyroid disease. Black cat owners should  contact their veterinarian if there are any changes in coat color, just to rule out serious health issues.

6. Black Cats Were Worshipped By The Egyptians 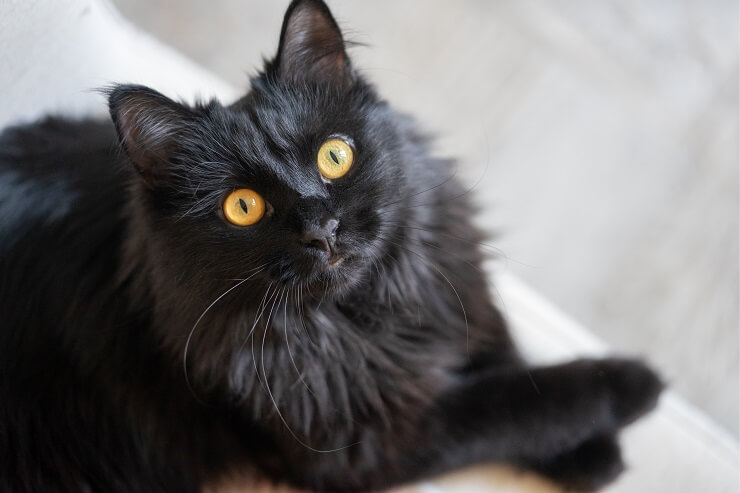 In 2800 BC, during the Early Dynastic Period of Ancient Egypt, a goddess by the name of Bastet was worshipped by the Egyptians. This goddess was not only the protector of lower Egypt, she was a fierce lioness warrior goddess and responsible for protecting the king. Bastet took the form of a black cat and is also considered the goddess of pregnancy and childbirth, possibly because of the fertility of the domestic cat.

Once cats were domesticated in Egypt, people believed black cats were the direct descendants of Bastet. Black cats were treated with the utmost respect, and protected food stocks from mice and other creatures.

Egyptians had so much love  for their furry friends that they had laws that harming a black cat, even by accident, was punishable by death. When cats died, they were mummified just like humans and as a sign of mourning, the cat owners shaved off their eyebrows, and continued to mourn until their eyebrows grew back.

7. How Black Cats Got A Bad Rep 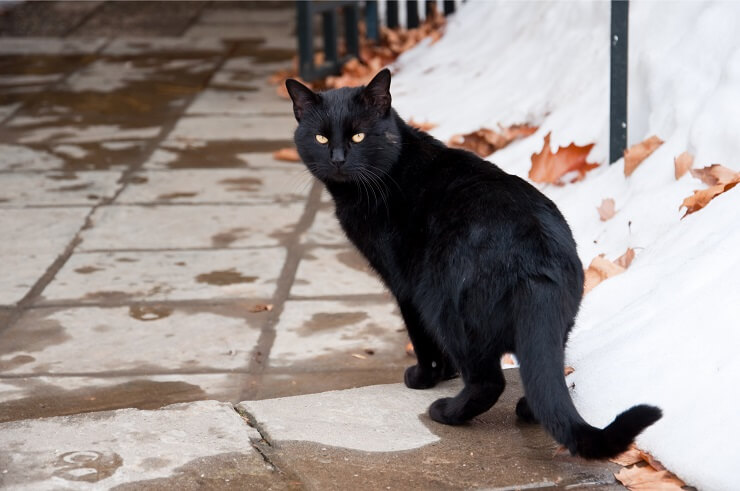 In the Middle Ages in Europe, black cats were associated with witches. In the 1560s in Lincolnshire, England, on a moonless night a father and son were traveling when a black cat crossed their path. They threw rocks at the cat until the poor animal fled into the home of a woman, who was suspected of being a witch. The next day, the father and son saw the alleged witch-woman who lived in the house and she was limping and bruised.

This made them assume witches could turn into black cats at night to roam around unobserved, believing she was the black cat from the night before. This belief spread to the USA with the first settlers and was held firmly during the Salem Witch trials.

8. The Richest Cat In The World Is A Black Cat

According to Guinness World Records, the world’s wealthiest cat ever was Blackie, who inherited an estate worth $13 million when his owner, a British antiques dealer named Ben Rea, died in 1988. The millionaire antiques dealer and recluse refused to recognize his family in his will and split the majority of his wealth between three cat charities, with the instruction to look after his beloved pet.