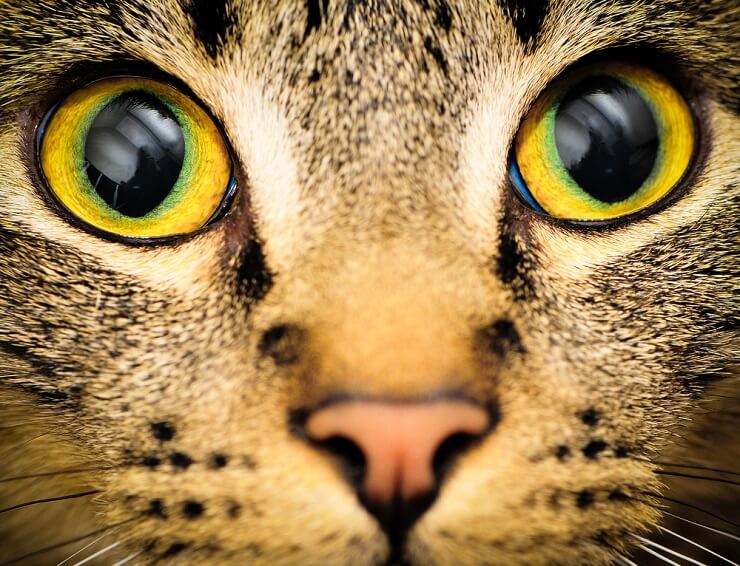 There are four different types of cat’s eye color which are blue, green, yellow, and copper. Included in these colors come many different hues and shades, which makes it seem like there are hundreds of colors of cat eyes.

The pigment produced by the melanocytes is called melanin. Melanin plays an important role in determining how dark your cat’s fur coat will be and the same thing is true with cat-eye colors. The more melanocytes there are in your cat’s irises, the darker the eye color will be. But cats don’t get brown or black eyes as people do. The darkest color you will see in a cat’s eyes is a dark copper brown.

The Most Common Cat Eye Colors

The color in your cat’s eyes is called the iris. The spectrum of the color they can have are those mentioned above, a mix of, two different colors and a half and half in one iris.

With that being said, the most common eye colors in cats are:

What Age Do Kittens Eyes Change?

When kittens are first born, their eyes are sealed shut. They are blind and deaf and rely completely on their mother for survival. Between seven and ten days later, their eyes will start to open and will be a cloudy shade of blue.

Once kittens are around 6 weeks old, their eye color may begin to change. Their eye color can change to a different shade of blue, green, yellow, or copper. In some cases, they may have different two different color eyes or a mix.

Yellow eyes in cats can range from a pale lemon yellow to golden orange shades, with various shades of rich amber mixed in. This is also common eye color for cats due to low amounts of melanin in their iris.

You can often see yellow or amber eyes in breeds like the Bengal, American Shorthair, British Shorthair, Manx, LaPerm, Bombay, Sphynx, and the Norwegian Forest Cat.

Copper is the darkest eye color that you will find in cats. Their eyes will be light brown with undertones of orange and red and may include flecks of yellow, green, or orange. This eye color tends to be rarer than the others mentioned.

Copper eyes may be found in the Japanese Bobtail, Maine Coon, Persian, Cornish Rex, and Chartreux. Copper is the darkest eye color you’ll find in cats, and it’s a more unusual hue than some others.

A cat’s eyes can range in color from yellowish-green to gooseberry-green to darker greens to blue-toned greens.

Green eyes can be found in breeds like the Chinchilla Longhair/Persian while that breed’s shorthaired versions are known for their sea-green eyes with black rims. The Tonkinese cats are known for aqua-colored eyes. The Russian Blue is known for emerald green eyes contrasting with slate-grey fur.

Blue eyes can range from a pale sky blue, up to a bright and beautiful sapphire color.

Blue eyes are much more common in white cats. This is due to the dominant white gene, which is also known as the epistatic white gene. This gene blocks out any other genes that create color, which results in a completely white coat. White cats with blue eyes are also at higher risk of being deaf than white cats with green or yellow eyes. This is because the gene for a white coat and blue eyes can cause the cochlea of a cat’s inner ear to degenerate within days of birth.

Certain breeds are known for their distinctive blue eyes like the well-known Siamese and Ragdoll breeds. Other breeds that can have blue eyes include the American Shorthair, British Shorthair, Balinese, Persian, Maine Coon, and Devon Rex.

Heterochromia iridium is a remarkable mutation and it occurs when a white or white spotting gene blocks the distribution and concentration of pigment in the iris during development. This condition can be inherited genetically or congenital due to a developmental defect or may be acquired through illness, injury, or medication.

In cats, this is also known as being “odd-eyed”. The condition is most commonly found in epistatic white cats that have one eye in blue and the other eye maybe, yellow, copper, or green.

Dichroic eyes feature two iris colors in one eye. This is caused due to the cat’s irises having varying amounts of melanin in various regions. Sometimes the eyes have a clear oval of one color around the pupil that fades into another hue. Sometimes the colors are divided into parts, such that a quarter or half of the eye is one color and the remaining section is a different color.

What To Do When Eye Color Changes Suddenly?

Uveitis is the inflammation of the uveal tract of the eye, which consists of the iris, ciliary body and choroid. It can be an isolated eye problem, but more often, it is a symptom of a number of other conditions.

Symptoms include red eye, cloudy eye, light sensitivity, squinting, rubbing at the eye, and protrusion of the third eyelid. If you notice any of these symptoms, your cat needs to be seen by your veterinarian as soon as possible.

Glaucoma is a condition of increased pressure in the eye, which will cause vision loss if left untreated. Typical symptoms are a cloudy, white, milky eye color. Glaucoma can also be a cause of uveitis.

Eye color changes in adult cats are always a cause for concern. If your cat’s eye color changes suddenly or over a period of time, consult with your veterinarian as soon as possible.

Cats have some of the most unique eyes in the animal world. Instead of having circular pupils like humans, the center or pupil is vertical while the iris comes in so many colors.