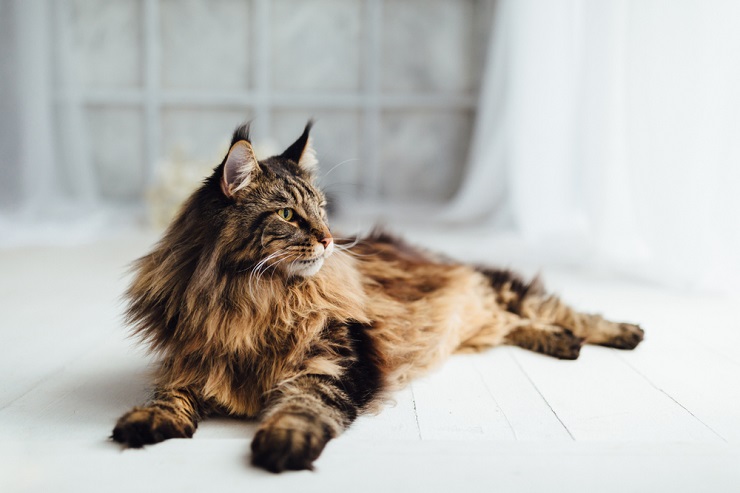 It’s easy to tell apart the typical domestic cat from a Norwegian Forest cat or to compare a Maine Coon vs. a normal cat due to the sheer size of the coon and the Norwegian.

However, when it comes to comparing the Maine Coon vs. Norwegian Forest Cat, these two felines are more similar than different.

For starters, the two cats look very similar as they are all fluff and large cat breeds. Both cats are exotic breeds that stand out due to their luxurious silky coat. The two are also known for their intelligence and the ability to learn new tricks quickly. But despite the similarities, these two gentle giants have differences that make them distinctly unique.

So, if you’re trying to adopt either of these felines and you’re wondering how you can differentiate between them, we will help you decide by outlining some key differences between the Maine Coon and the Norwegian Forest. 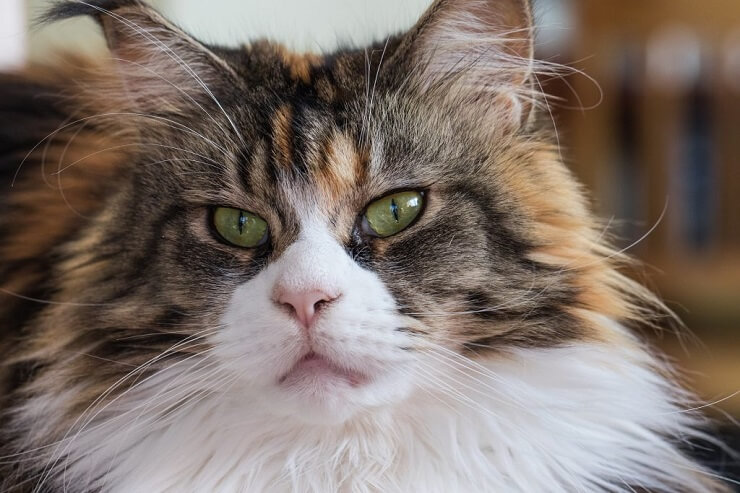 The Maine Coon originated from Maine states in the United States. It’s a cross of an Angola cat and the Shorthair American cat. It’s the official cat of the Maine State and one of the oldest natural cat breeds in North America. This cat has several nicknames, including Coon cat, Snowshoe cat, Maine Shang, and the Gentle Giant.

The Norwegian Forest cat origin can be traced to Northern Europe. This cat almost went extinct in the early 20th Century due to crossbreeding. Fortunately, a breeding program was started in 1930 that helped preserve the cat for future generations. It was made the official cat of Norway in the 1970s by King Olaf V. Skaukatt. Some of this cat’s nicknames include Wegie and Skogkatt.

Let’s look at how these two giant cats compare when it comes to their physical features. 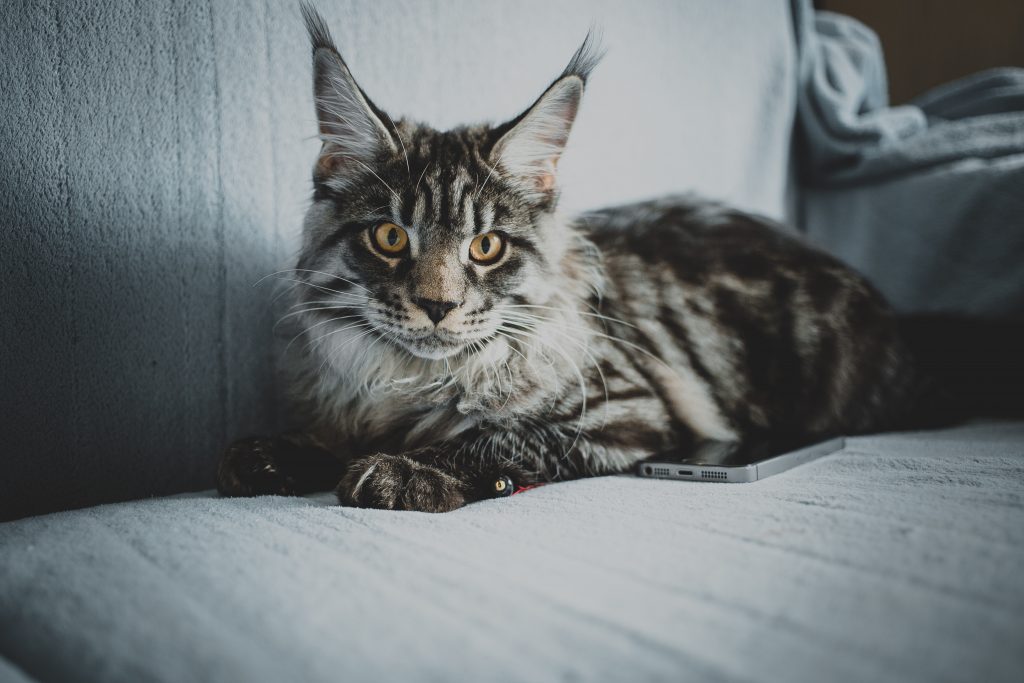 A key difference that sets these two cats apart is their head and face features. The Norwegian has a delicate facial appearance. This cat’s head has an equilateral triangular shape. Its forehead is flat, and its nose profile tends to be relatively straight while the muzzle appears to taper to a point.

The Maine Coon has a lion-like appearance. The head of the Maine Coon is slightly wedged with high cheekbones. This feline’s elongated nose profile is softly curved while its muzzle appears square and is wider than that of the Norwegian Forest Cat. Some people believe that Maine Coons look happier because of the shape of their heads.

While these cats can be confused due to their thick, luxurious, and beautiful coats, there are some notable differences.

The Norwegian’s double coat has a silky, water-repellent overcoat and a wooly undercoat. Its coat is smooth, soft, and delicately fine.  The Norwegian also has a beautiful ruff around its neck, shoulder, and chest which gives it a royal look. The tuff is shorter on the cat’s shoulder and chest.

The Maine Coon comes in black, white, blue, or light cream-colored coats, while the Norwegian exhibits amber and red coat coloring on top of the main colors of the Coons. 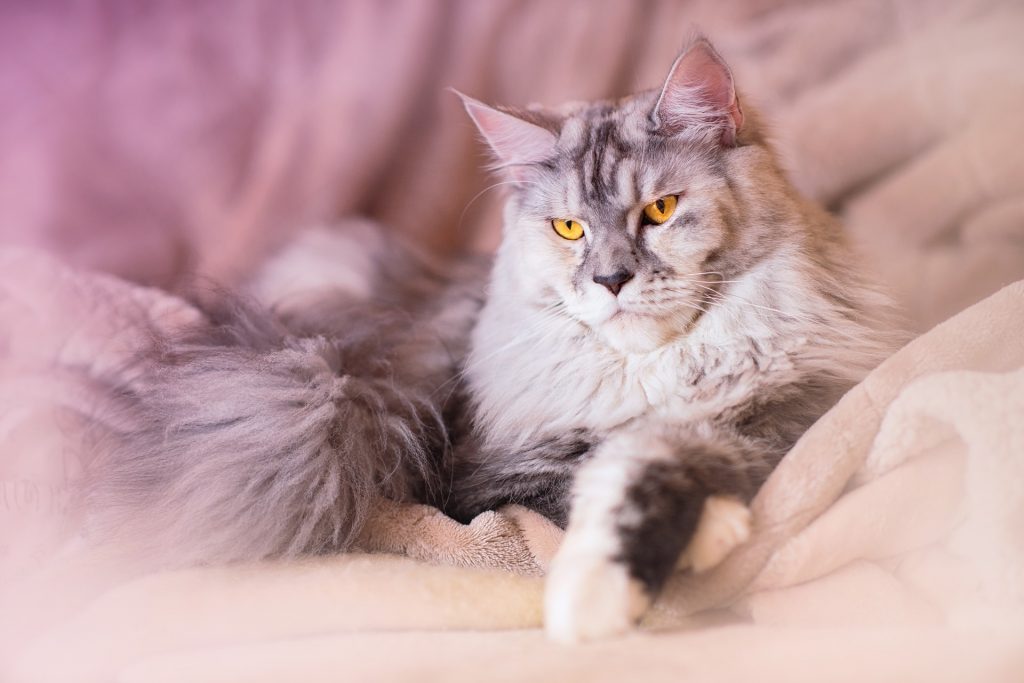 The two cats have gorgeous, fluffy tails that are as long as their bodies.

The Norwegian’s tail has full and flowing hair, and it’s pointed at the tip. The Maine Coon’s tail is less shapely and has a bushy end. 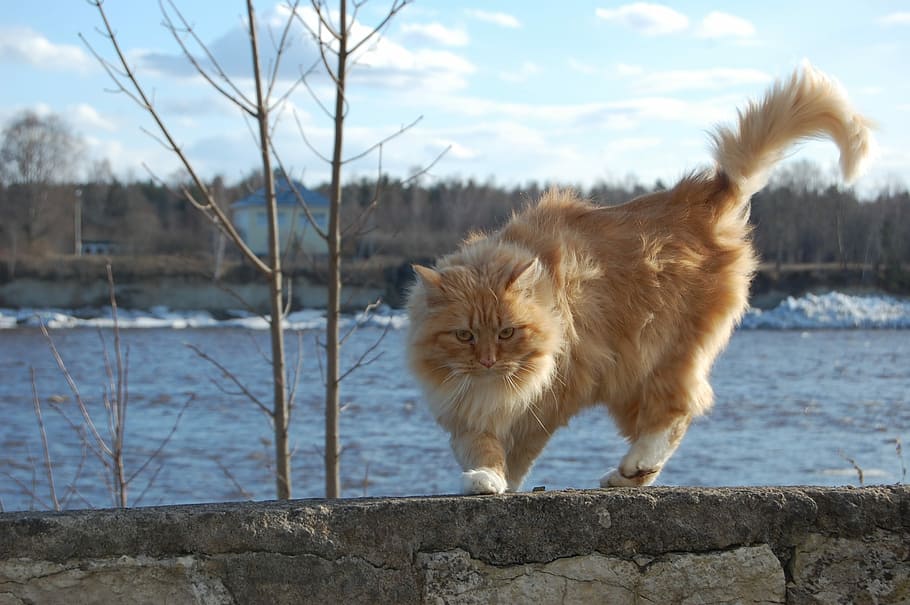 Both cats have large pointed ears and distinct ear tufts called furnishings. These long hairs that stick out of the felines’ ears give these Northern cats a wild exotic look. The furnishings also keep the felines warm in cold weather and protect them from frostbites.

The Maine Coon large ears are set high and are wide apart. Their ear tufts are quite fluffier and longer compared to those of the Norwegian. Norwegian Forest cats have widely spaced ears that are tilted forward. The ears are round at the top, and sizes range from medium to large.

The Maine Coon has large, oval-shaped eyes that are slightly slanted and set wide apart, while the Norwegian forest cat has large, almond-shaped eyes set at a slight angle.

Both cats have muscular, solid bodies. Maine Coon cats’ long and muscular bodies are large and rectangular, while Norwegian square bodies are medium-sized.

Both cats have medium-sized legs and toe tufts. Maine Coon’s four legs are equal in length, while the Norwegian forest cat’s back legs are slightly longer than the front legs making this cat an exceptional climber. 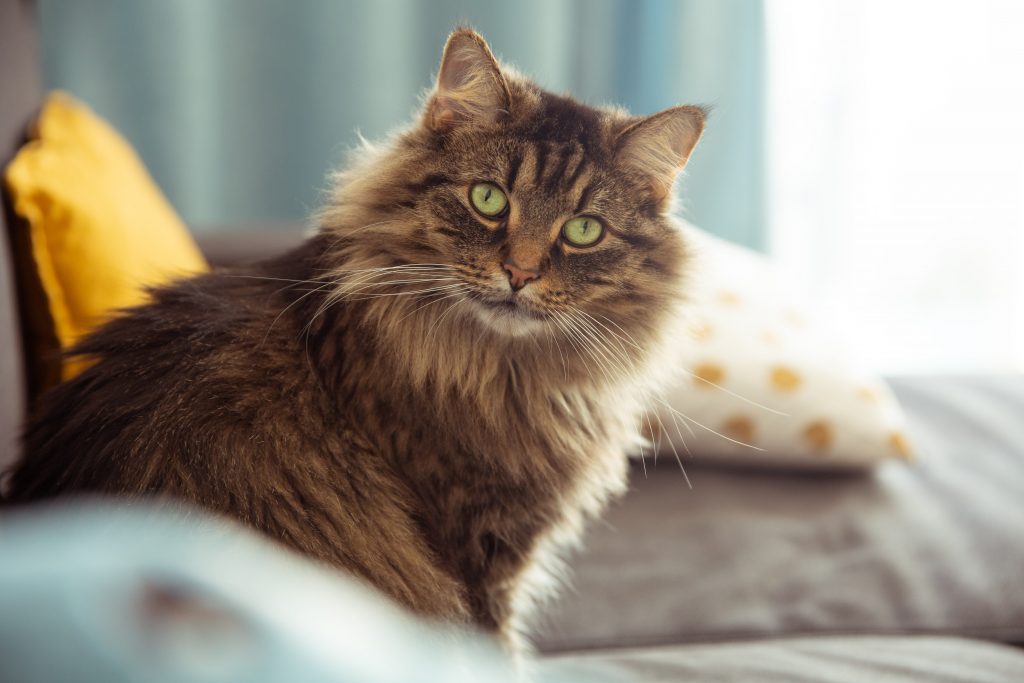 A full-grown Maine Coon weighs 7-12kgs and 5-8kgs for males and females, respectively. It takes 3-5 years for a Maine Coon to reach its full size.

The Norwegian Forest male cat weighs 6-9kgs, while a female cat’s weight is between 4 and 6kgs. It takes five years for a Norwegian to reach its full size.

Even though both cats are large, the Maine Coon cat is bigger. A Maine Coon cat called Barivel holds the record for the world’s longest domestic cat measuring 47 inches. 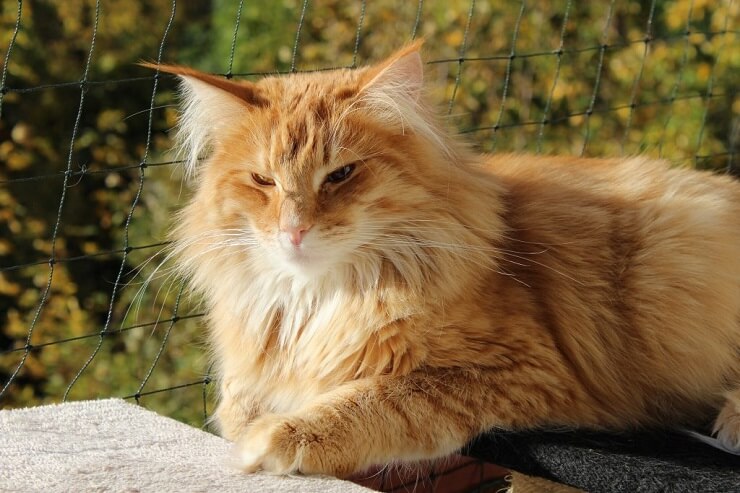 Don’t be fooled by the Maine Coon or the Norwegian Forest cat rugged look or large size as these felines are friendly and outgoing. They are also gentle, intelligent, and independent. Even though both cats are loyal, Norwegians are only loyal to those they are close to or with those they interact with.

The Maine Coon is a trainable feline, and many Maine Coons embrace the idea of walking on a leash or a harness. Maine Coons are also playful and friendly, getting along very well with children and other domestic pets, including dogs and other cats. These cats love spending time with people and are playful even as they get older. Coons are also fascinated by water.

Norwegian Forest cats are calm, undemanding, and less friendly. They may play a little bit, but they also lose interest very fast compared to Maine Coons.  They are also entirely independent and will always find something to keep them occupied. They are great company for children despite their independence. Norwegians also enjoy playing with water.

Maine Coons are quite chatty and are known for their chirp and trill sounds. On the other hand, Norwegians are quieter and will only make a sound when they need something. Your Maine Coon will also demand more attention from you compared to a Norwegian Forest Cat.

The Norwegian Forest cat has a longer life expectancy compared to the Coon. The former can live for 16 years and beyond. Maine Coon, on the other hand, has an average life span of 12-15 years.

The price of purchasing these two cats differs across the world.  In the US, Maine Coons are more expensive than Norwegian Forest cats. Also, Maine Coon tends to eat more, making this cat costly to feed.

Both the Maine Coon and Norwegian Forest originated from cold climates. They are also pretty large and fluffy. Despite their many similarities, these two cats also have their differences. The head shape is one of the key differences between the two. Another difference is the shape of the tail, with the Norwegian tail having a pointed end, unlike the bushy and less shapely end of the Maine Coon.

Lastly, Coons are also more vocal compared to the Wegies. However, the bottom line is that both these felines have great personalities that make them wonderful companions.

Is Maine Coon bigger than the Norwegian forest cat?

Both cats are big, but Maine Coons are quite the giants. A main Coon cat called Barivel has the record for the world’s longest domesticated cat.

Is Maine Coon a forest cat?

Many believe that the Maine Coon is a descendant of the Norwegian Forest cat because of the similarities they both share.

How can I tell if my cat is a Norwegian Forest Cat?

Norwegian Forest cat has medium-sized ears, a straight nose, a strong and slight round chin, a flat forehead, and a triangular-shaped head. The Maine coon and Norwegian Forest cat also differ in the length of their legs. Maine Coons have their four legs even and equal in size, while Norwegians have longer back legs.