Cats are adorable, but big-eyed kitties are even more attractive. The irresistible gaze of these furballs is what makes us fall in love.

If you’re looking for a cat with big eyes, then you’re at the right place as we have the perfect list for you. We give you the characteristics of 18 adorable big-eyed cats complete with pictures.

Hopefully, after reading through this list, you’ll make an informed choice on the right feline for you who will not only swoon over you with her big bright eyes but with her big heart too. 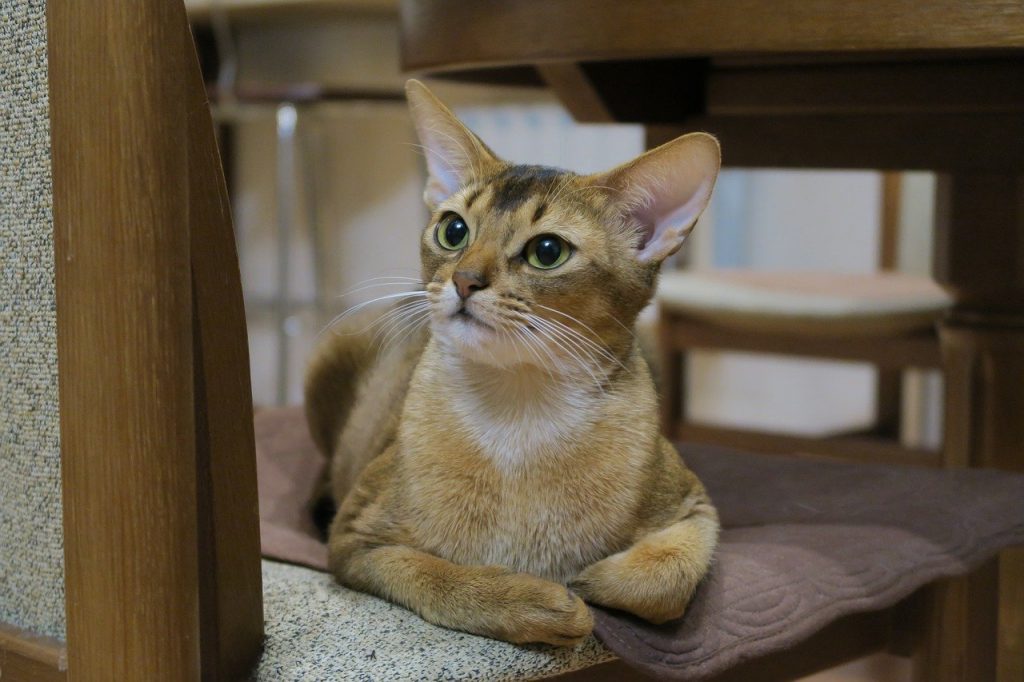 Nicknamed Abys, the Abyssian cat is believed to have originated from Southeast Asia and the coast of the Indian Ocean. This medium-sized cat weighs 8-12 pounds, and it’s characterized by slender legs and large ears.

This cat also has large hazel, gold, or green almond-shaped eyes. Add this to the cat’s long tapering tail, and you have one cute feline!

You’ll also be pleased to know that this cat’s short textured coat needs minimal grooming. So, you won’t have to deal with lots of hair on your couch or bed.

The coat colors of the Abyssinian cat vary from reddish-brown, red, blue, lilac, fawn, chocolate, and silver while the backsides and tail hairs are striped with bands of black.

The average lifespan of the Abyss cat is 9-15 years. The Abyssinian feline is also an energetic, social, and intelligent breed that enjoys learning new tricks and climbing things. Another beautiful big-eyed feline, the British Shorthair is also called the Domestic shorthair.

This broad-bodied cat has strong short legs, chubby cheeks, and a rounded tail tip. The cat also has round paws, a round head, and large round brightly colored eyes.

British Short Hair originally had a bluish-grey medium coat, but today you can find this cat in every shade and pattern. This cat breed matures slowly and has a lifespan of 12-17 years.

During fall and spring, British Short Hair experiences seasonal shading and may require daily grooming. Although the Domestic Shorthair isn’t as energetic as the abyss, this is an intelligent cat who enjoys making friends. 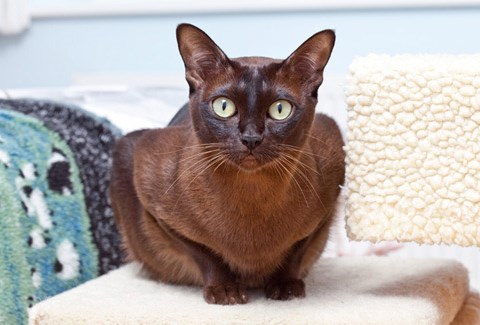 The Burmese cat originated from Myanmar. You can’t miss this cat due to her round head and a pair of wide-set large round green or golden eyes.

This muscular feline has a short glossy textured coat which is chocolate for kittens and dark brown for adults. Burmese weigh between 6-12 pounds with a lifespan of 16-18 years.

This cat breed is energetic, playful, and trainable. Burmese also enjoy jumping and climbing, especially at a young age. This cat breed requires little grooming since they don’t shed much.

This is furball is loyal, loving, and very energetic. They are also very athletic and love to hunt, jump, and leap. 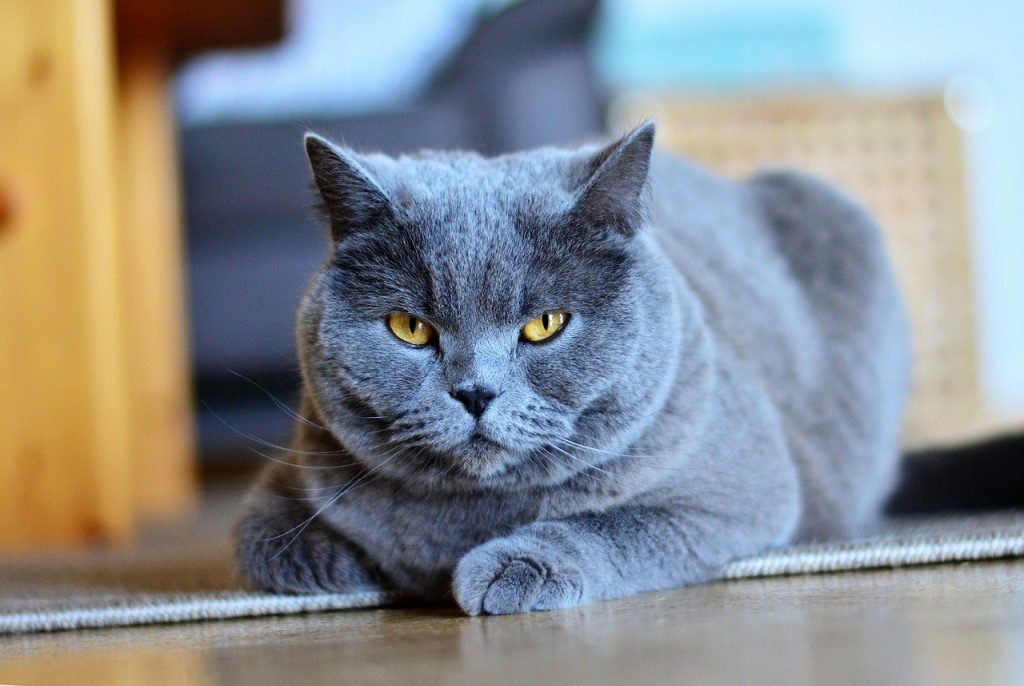 Chartreux is often referred to as the smiling cat of France. This feline has a solid blue-gray wooly coat and large, alert orange or copper eyes.

This cat is muscular with a broad round head and fine-boned legs. The Chartreux is a slow-maturing breed weighing between 12-16 pounds with a lifespan of 11-15 years. This breed is intelligent, quiet, and friendly with a cute sweet smiling expression. Cornish Rex has a soft curly coat with blue, red, chocolate, silver, smoke, and tabby colors. This feline’s egg-shaped head and captivating blue-green/golden big oval eyes give it the out-of-this-world look. Besides, the cat’s narrow waist, long limbs, and wide ears make her stand out from the crowd.

The Cornish Rex weighs 6-10 pounds with a lifespan of 10-16 years. Cornish Rex is an adventurous, playful, intelligent, and mischievous cat. This feline loves to sprint, climb and leap. Due to its long limbs, this furball is often prone to hypotrichosis and hind leg lameness. 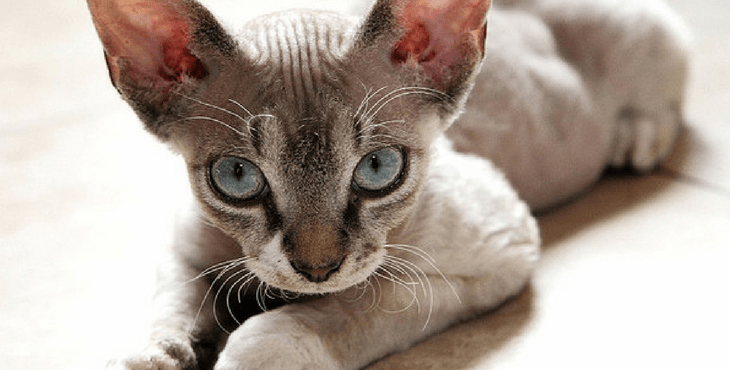 Devon Rex is named after the Devonshire region in England, where it originated from.

Some of the prominent features of this feline include a fine-textured short wavy coat, wide-set oval-shaped eyes, and large triangular ears.

The Devon Rex is a low-shedding breed that can live up to 9-15 years. This feline is also known to be intelligent, social, mischievous, and loves the company of people and other pets. 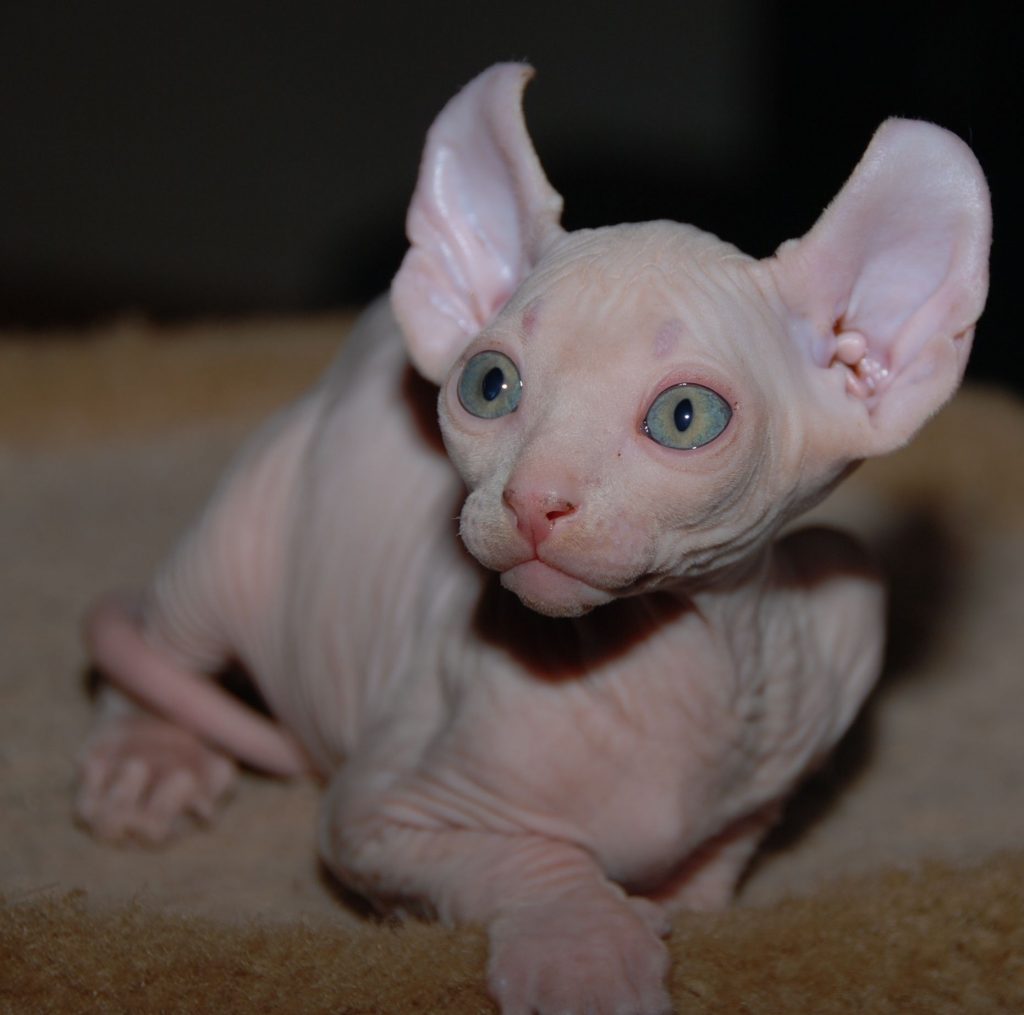 Elf Cat is a rare feline breed that originated from the United States. It’s a crossbreed between the American Curl and Sphynx.

This cat breed has inherited its huge eyes and hairless appearance from the Sphynx and its curled ears from the American Curl. Due to its hairless body, Elf Cat is an indoor cat that requires regular grooming to protect its sensitive skin.

Elf Cat is a very social, playful, and intelligent breed that loves to learn new tricks. This cat can live from 8 to 14 years. 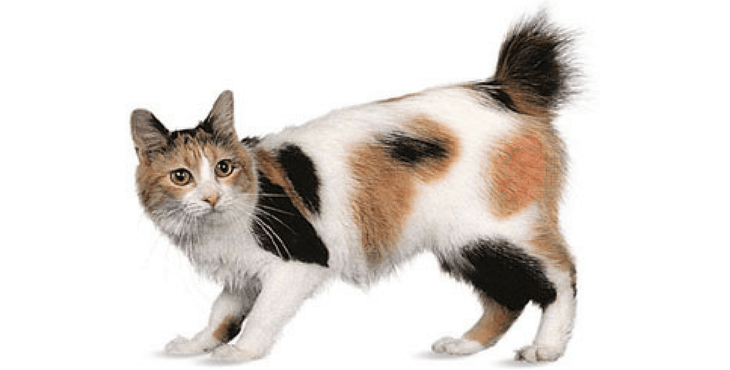 You’ll fall in love with this feline’s soft, chirpy talkative voice and its tri-colored coat of red, black, and white colors. This is an affectionate furball who is also playful and good-natured. The Japanese Bobtail also enjoys the company of humans, dogs, and other cats.

The Japanese Bobtail is believed to bring good luck and prosperity and can live from 15 to 18 years. 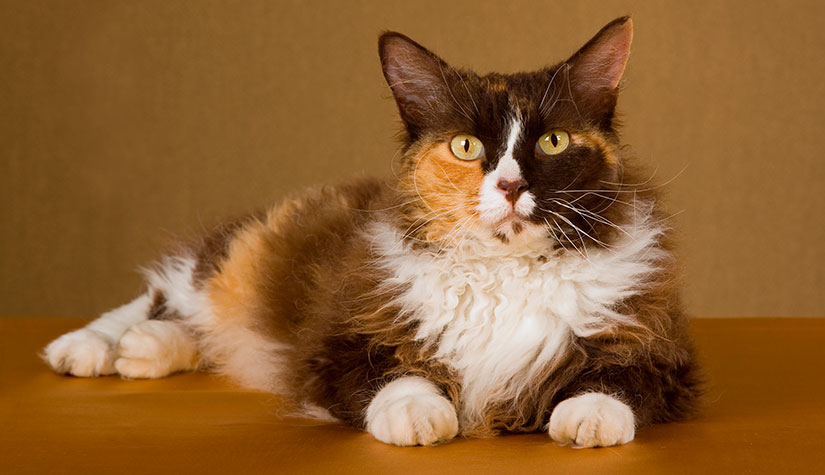 LaPerm has a lifespan of 10-15 years. This breed is mischievous, smart, and humorous, making it fun to have around. LaPerm also sheds very little fur, making it ideal for cat parents looking for an easy maintenance feline. 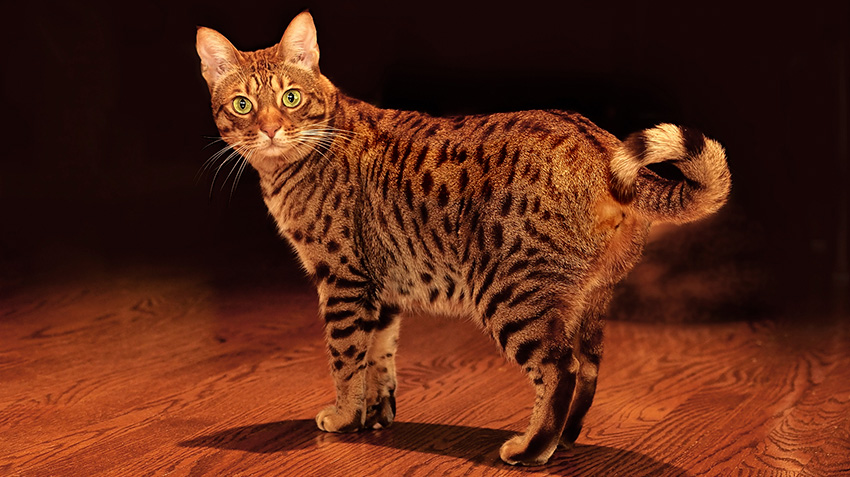 The Ocicat is a combination of Abyssinian, Siamese, and American shorthair cat breeds. This domesticated cat has a solid muscular body, powerful legs, and a wild exotic look. This purring machine’s large almond-shaped eyes make it a favorite among many cat parents.

The Ocicat short coat is satin-textured and spotted.  This feline also has oval paws and a wedge-shaped head.  You’ll enjoy the company of this cat due to her intelligent, energetic, playful, and very social nature. This cat breed weighs 9-15 pounds and has a lifespan of 10 to 15 years. 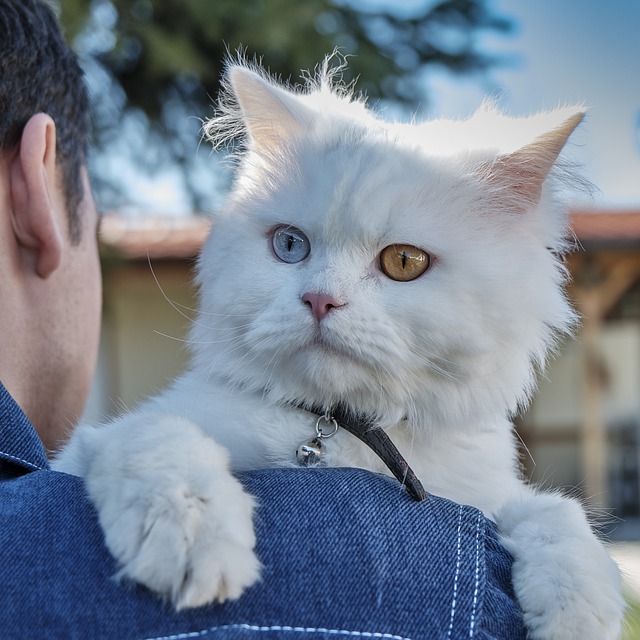 The Persian cat originated from Persia and Turkey. This exotic-looking feline has a sturdy, masculine body, a large round head, and large blue-green eyes. The flat face of this feline plus its short nose and rounded-tipped small ears give this cat its cute look. Another feature that sets this feline apart is its long thick, and shiny coat.

Originally Persian cats had gray coats, but today you’ll find them with silver, gold, white, and smoky coat colors. Due to its thick coat, this breed sheds a lot and requires regular grooming. Persian weighs 8-12 pounds and lives up to 17 years.

The Persian is a popular breed among feline lovers due to its calm, quiet and sweet personality. This cat is also loyal, and it makes strong bonds with humans. Everything about this large cat breed is big, from the long bushy tail, the large head, and the round wall-nut eyes. But don’t be fooled by this feline’s large body, as this is one of the sweetest cats. The Ragamuffin is a cat who loves to play and to be carried around. This cat also enjoys learning new tricks and accompanying its owner for walks.

This cat breed has a medium-long thick coat of several shades and patterns, including black, white, cream, chocolate, cinnamon, and blue. Ragamuffins can live from 15 to 20 years, and they usually mature slowly. 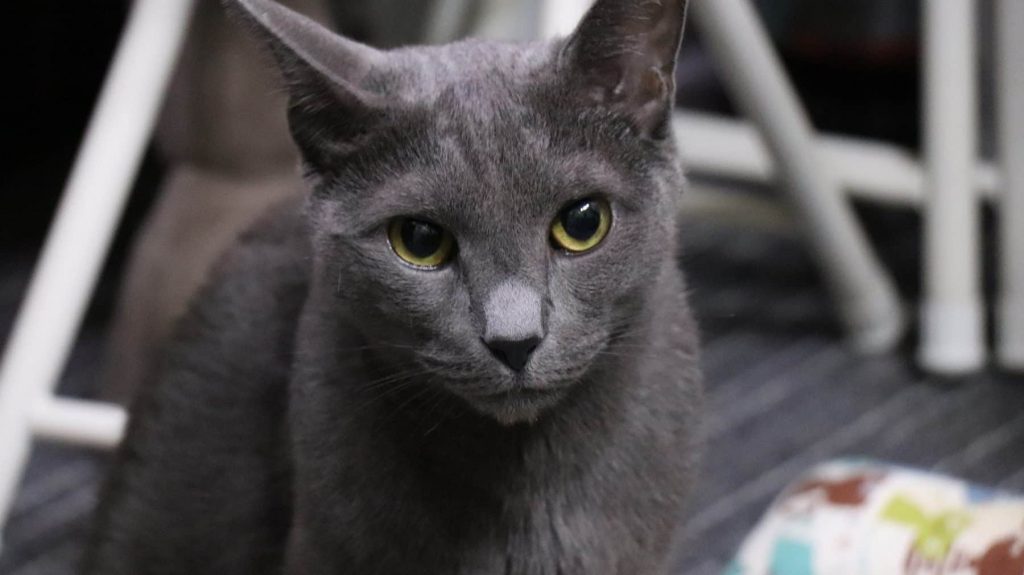 The Russian Blue cat is also referred to as Archangel Blue, Foreign Blue, or Maltese cat. This breed originated from Northwest Russia, and it has a soft silky bluish-grey thick coat with large bright green round eyes.

This cat breed also has a long tail, pointed ears, and a wedge-shaped head.  It weighs 8-15 pounds and lives 15 to 20 years.

There is never a dull moment with this furball as it’s a smart, curious, and playful cat. 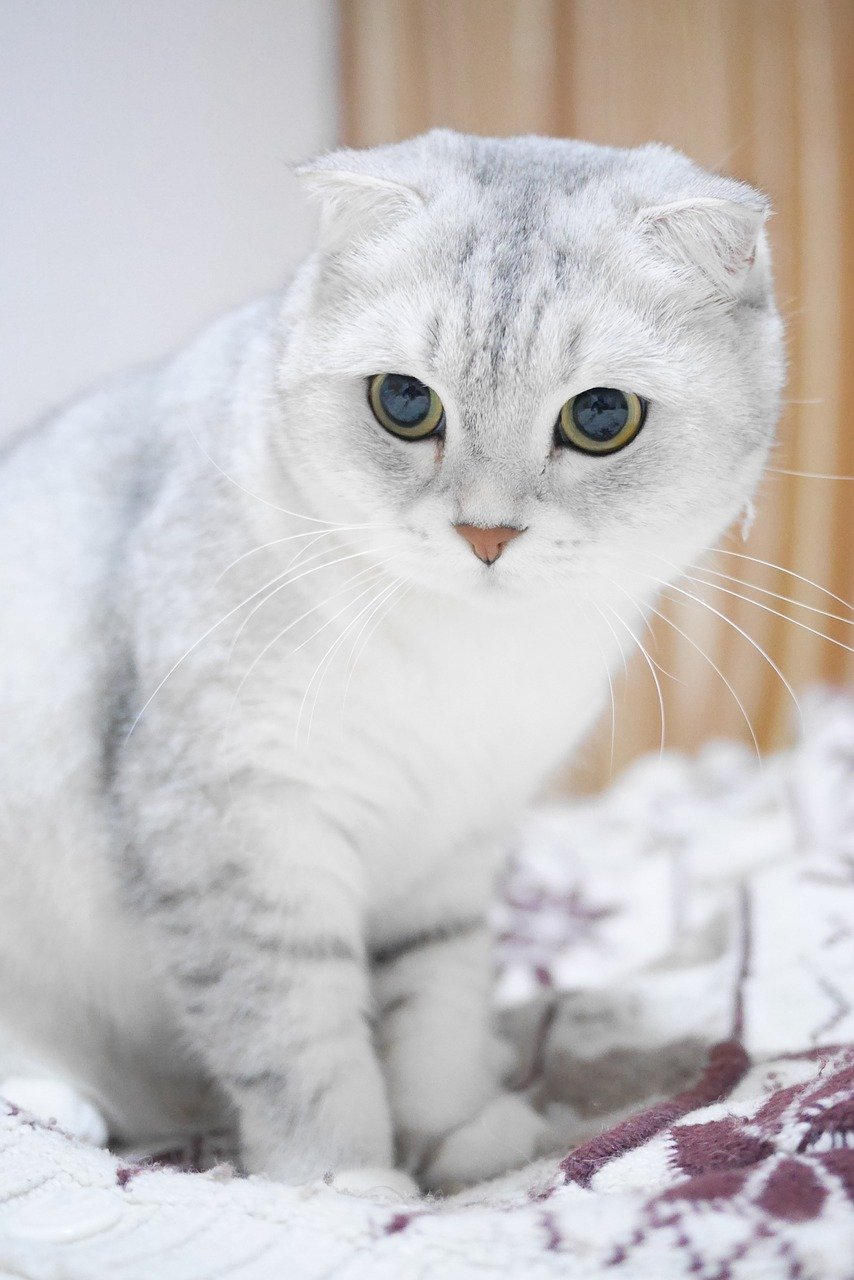 This medium-sized kitty has large yellowish-orange eyes, a round flat face, and forward folded ears. Scottish Folds weigh between 9 and 15 pounds and live between 11 and 15 years.

This is a sensitive feline who loves the attention and company of people and other pets. You may also notice that your Scottish Fold loves to pose in peculiar positions. 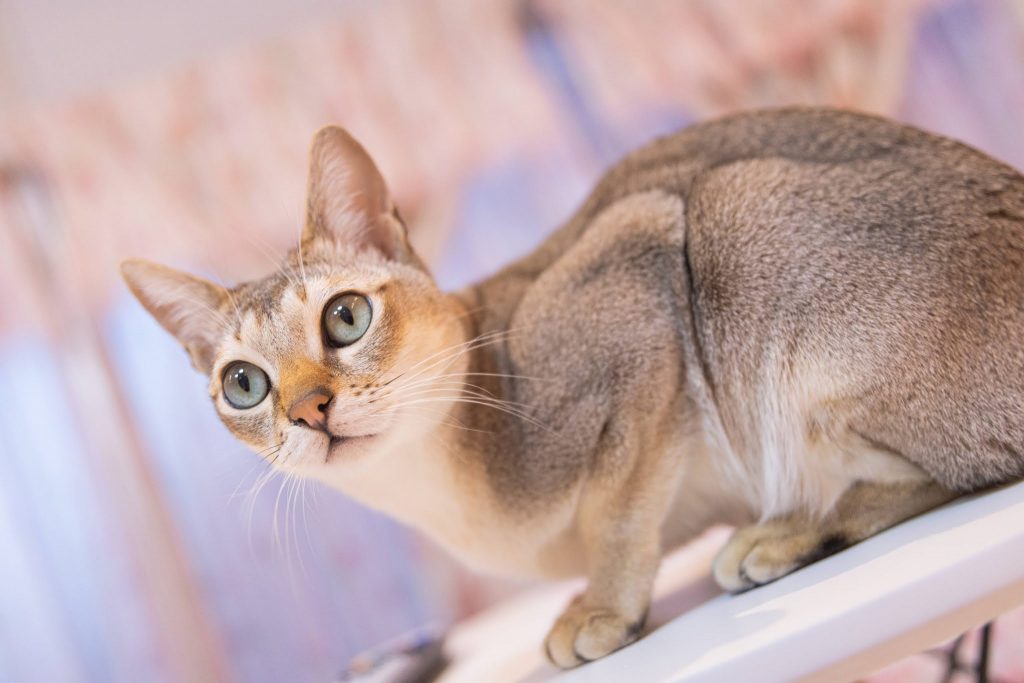 The Singapura cat originated from Singapore.

This furball is one of the smallest cat breeds in the world. The cat’s big round hazel eyes set it apart from other felines. This cat also has big ears and a sepia-colored shiny coat.

Although small-sized, this cat is mischievous and will often love to learn new tricks. This is also an intelligent, social and active cat breed. With its tiny body, this feline weighs 4-8 pounds and has a lifespan of 11-15 years.

The smooth hairless Sphynx origin is in Canada.

This medium-sized cat breed has lemon-shaped, aqua/green large eyes, a wedge-shaped head, and wrinkled skin. Other features of the Sphynx include a broad chest and large ears.

Although this cat is hairless, it requires regular grooming since its delicate skin must be kept moisturized with scent-free oil/lotion.

This cat, who loves to explore has a lifespan of 8-14 years. Sphynx cats also love human attention and have impressive jumping skills. The Tonkinese is a crossbreed of the Siamese and the Burmese. The medium-sized muscular cat breed has cute, round, huge blue or yellow-green eyes.

Another distinctive feature of this playful cat is its short soft, silky-textured coat that comes in a variety of colors, including chocolate, blue, platinum, and champagne.

The Tonkinese cat is generally low maintenance since its short hair doesn’t shed too much. This cat breed weighs 6-12 pounds and has a lifespan of 12-16 years.